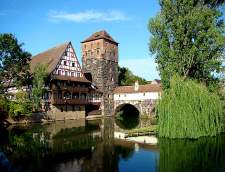 "It was stressful and disappointing"

The class was a good size and the foreign pupils very friendly.

The initial problem was that I was put into a class that had started two months beforehand. I was told I was put into that class because of my good exam result. However sitting an exam on a computer at home with no deadline is very different from speaking German in a class of students with no time to think.

Overall the students were not considerate and talked and threw items at each other when the teacher was trying to speak. I simply could not hear what he was saying and both the teachers made no attempt to control the students.

One of the teachers was very nice and helpful and the other yelled a lot. The students come and go as they pleased and it was obvious that some of them did not want to be there.

The location of the school was excellent. There were no activities and no facilities there apart from a toilet. A room where we could have sat and chat during breaks, and a water cooler for drinks would have been an asset.

It would make more sense to put out a timetable of classes with their dates at the beginning of the year, or earlier if desired. Prospective students could then make a decision on when to start and book their travel accordingly.

I was told that the course was for six weeks but found out upon arrival that it was actually for five weeks and I had to change my flights.

The office staff were too busy and rushed off their feet to even have time to help with questions and it appears to be poorly run.